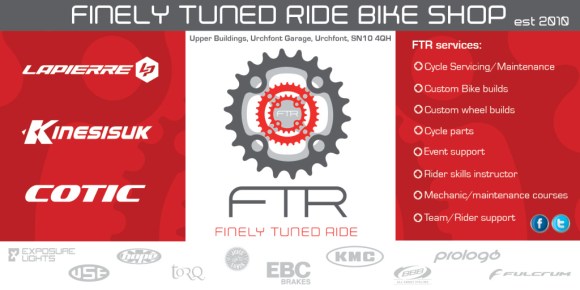 Rob Rowe is the founder of Finely Tuned Ride (FTR), which started life as a mobile bicycle repair business. Having ridden bikes since childhood, Rob went on to competing in the early 90’s, participating, and winning trophies in, trials, downhill (DH), cross country (XC) and road disciplines. He is also no stranger to event organisation having been a member of the Cornwall Mountain Bike Club back in the day before more recently joining the Salisbury Plain Area Mountain (SPAM) Bike club.These club memberships have resulted in Rob organising events local to each area. 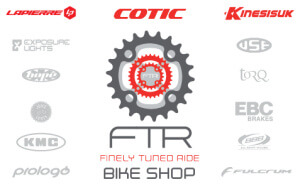 Rob’s technical skills have been acquired over most of his life; firstly fixing his own bikes before working as a bikeshop mechanic in the early/mid 90’s. He then went on to train as a Licensed Aircraft Engineer and has over ten years experience within the aviation industry. Having provided informal support to the TORQ Performance Mountain Bike team and at Twentyfour12 Mountain Bike endurance events in the past, and thanks to the fickle nature of the aviation industry, Rob decided to put all his efforts into establishing his own business within the cycling industry and FTR was born.

Since concentrating on providing services to the cycling industry Rob has gained numerous qualifications, so no matter what service you require you know FTR are suitably qualified and experienced. Qualifications include: 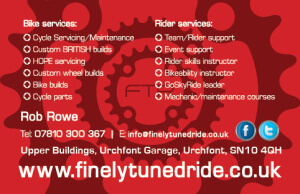 On moving to Urchfont in July 2010, Rob soon established himself as a first stop for local cyclists within the village  and surrounding areas due to his mechanical expertise and high level of customer service. Two and a half years later and Finely Tuned Ride acquired its own premises; still within the village of Urchfont, the Finely Tuned Ride workshop is co-located with Wildmans of Urchfont. Having premises is a win-win situation in that it delivers a better environment within which to work, as well as enabling customers to drop by at their convenience as opposed to previously having to make an appointment.

The mobile service has been wound down due to expansion of the premises and opening of a showroom (Aug 2015) and taking on the great range of bike from Lapierre! This has enabled FTR to hold and display a greater range of bikes, accessories and components. In parallel, this has freed up space in the fully equipped workshop increasing capacity and reduced turn-around times on workshop jobs, all helping to get you, the customer, back on the road/trails quickly. There is still a pick up and drop off service available in the Devizes area for a small fee.

In addition to bicycle repairs, Rob provides a variety of services; ranging from looking after a previous Commonwealth and Olympic Mountain Biker as part of the British National Mountain Bike Series, supporting the Welsh Junior Road Cycling Team during their European and Domestic campaign, to teaching local children how to be safe on the roads as one of Wiltshire’s Bikeability Instructors.

Rob is also able to offer rider skills courses and maintenance courses for those who would like to become a little more skilled in either aspect.